Bowel disorders are common in dogs, and they are often related to intestinal inflammation.

Dog models have been used to bridge the gap in scientific studies because they share similar pathophysiology to humans. The spontaneous canine model shares remarkable homology to human IBD including known genetic basis, impact of gut bacteria, similar clinical presentation and disease activity, method of diagnosis (biopsy), and positive response to immunosuppressive therapy. While not used as the sole marker consistently elevated calprotectin may be associated with a diagnosis of IBD in dogs, as it is in humans.

What is it:
Fecal (fCP) concentration is a sensitive but nonspecific marker of intestinal inflammation in adult dogs, and is useful for differentiating organic intestinal disorders from functional disorders.[1] Calprotectin has demonstrated a high sensitivity for organic intestinal disease. Calprotectin is expressed mostly by neutrophils, monocytes and activated macrophages, and also has bacteriostatic and fungistatic properties that protects intestinal epithelia.[2] GI conditions have been divided into organic (OBD) and functional (FBD) disorders. Organic diseases have measurable physiological changes, such as the intestinal inflammation found in Inflammatory bowel disease (IBD). Examples of functional GI disorders, include irritable bowel syndrome (IBS) or functional abdominal pain, they cause symptoms but are not associated with any physiological damage. Calprotectin has also been used for monitoring IBD activity and predicting relapse.[3]

Treatments:
If a dog has a high level of calprotectin and any alarming symptoms it is recommended IBD, malignancy, or other cause of significant GI inflammation is rule-out. Lower levels may help differentiate which clients may not need further evaluation, or those that may benefits from other treatments first. A low level identifies that GI inflammation is unlikely. A moderate level may address the cause of inflammation and recheck in 4-8 weeks.

IgA is an important antibody isotype involved in protective responses on mucosal surfaces. It acts primarily by effectuating immune exclusion of foreign material. sIgA is a marker of intestinal maturation in young animals, and an indicator of intestinal inflammation and immunity in adult dogs. It is the dominant antibody type found in mucosal secretions, in the protective layer between the mucosa and microbe, and is thought to regulate the intestinal microbiota.[10] The difference among species in the number of genes coding for α chains; humans have 2, and dogs only 1. In humans there are 2 subclasses IgA1 found in serum and IgA2 in secretions, a dichotomy absent in dogs. 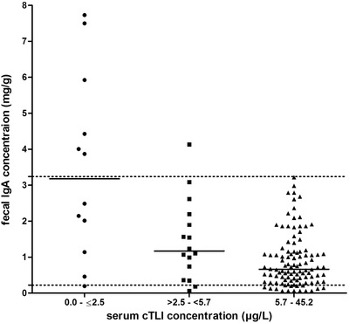 As noted in Figure 1, significantly lower fecal sIgA concentrations and a low serum canine trypsin‐like immunoreactivity (cTLI) concentration was consistent with a diagnosis of EPI.[12]